You are here: Home > About Me > My Stories > Broken Leg

It's now {jumi [jumi/brokenleg.js]} days since the unfortunate accident on 23rd September 1997...

On 23rd September, 1997, on my way home from work, I broke my leg and ended up in University College Hospital, close to my (then!) home in London.

Travelling home from work on the afternoon of Tuesday 23rd September 1997 after a whole day's work following a 1030 mile trip to Eire over the weekend with Mark & Bruno, I arrived at the junction of Gordon Street and Endsleigh Gardens (look it up in the A-Z), aiming to turn right and cross the Euston road. 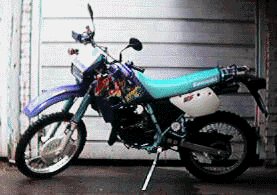 I saw the lights were green, there was no traffic coming from either direction so I 'gunned' the 125 to its full 12bhp (still restricted until it's run-in) and aimed for the lights....

As I did this, the back wheel skipped out (to the left and I don't know why. It's not the first thing one thinks of when a bike is trying to escape from beneath you!) so I put my right foot out to save the moment, only for the front of the bike to veer violently to the left.

As I corrected this (by turning the wheel back to the right, still aiming to get across the traffic lights), the bike came down heavily on the right hand side. A bit like a slow-speed high-sider

Unfortunately, my foot was still dragging along the road and was now slightly in front of the bike with the result that the right hand footrest came down on my shin, trapping my leg between it and the road.

SNAP! went my Tibia under the weight of the bike

Thinking i had only banged my leg, I continued - Yep! I made it across the lights, taraaa - over Euston road and on to my garage. By this time I had managed to get my foot back on the footpeg but it just felt numb although I couldn't use my back brake.
I reached my garage, stopped and put my weight on my right leg to put the sidestand down (for those of you reading this that have never ridden a bike, that's on the left-hand side)

Fortunately, a neighbour was parking her car. As I asked her to help me off the bike, another neighbour arrived - he also rides a KMX - and I asked him to help me get off the bike.
Once off, he called 999 and asked for an ambulance.
I leant on the bike until the ambulance arrived about 10-15 minutes later.

The Paramedics examined me, removed my boots & leathers, suggested I had a broken leg and took me to hospital.
The neighbour had put my bike away, along with my jacket, helmet, boots etc. and handed me the keys.

As everyone would expect, I took my psion with me! 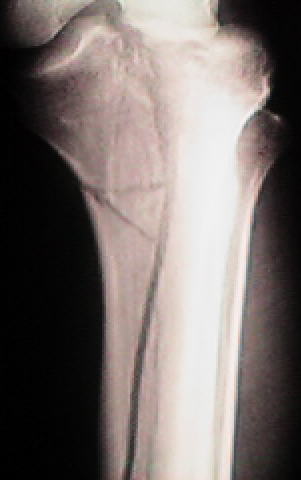 Examined in casualty (A&E), X-Rayed, confirmed broken Tibia from just below knee, one crack across the bone, one vertical for about 50-60% of the length of the bone!

Moved to ward, phone wasn't working (bloody BT) so had to use the phone at the nurses station to let people know what had happened, plaster cast put on overnight (OUCH. That bloody hurt!), painkillers administered and I went to sleep.

Next morning, visited by consultant who advised I would be operated on around 10:00 that morning.

Basically, the operation consisted of opening my leg up (incision) from the top of the knee downwards for about 9" (if you want it in 'foreign' measurements, work it out yourself!), placing a metal plate around the broken bone and screwing the plates together to hold the bone in place while it heals by itself.
From what I remember of the X-Ray after the operation, there are about 6 screws

Spent rest of day recovering. Powerfull stuff that knock-out drug... ...Then, they arranged to move me from Casualty at University college hospital to an orthopaedic ward at the Middlesex hospital, just up the road and in an old drinking area (Goodge street). This happened on Thursday, 25th September (25 years to the day since I started work for the Post office now called BT). I remained there for a week until Wednesday, 1st October when Susan (my sister) brought me home, complete with leg brace.

The leg-brace is a soft wrap-around, fixed in place with velcro straps. It has metal rods down each side that are hinged at the knee. It can be set to restrict the amount of knee-bending allowed.
It is easily removed and only really needs to be worn when walking (hopping) around.
The next day, Lee & Keith arrived to rearrange my living room furniture. I deliberately asked Lee as I know how much he hates ALL the furniture in my flat - "it's so C/H". Between them, they threw out the old sofa & chair & replaced it with a bed from one of the spare rooms (sorry MarkB, have to find another room in the flat for you) This meant I could spend my recovery period in relative comfort ha ha ha.
No chance to get bored either... Work still coming in, learning 2 new programming languages (watch this space - or at least one very close by...), finding all the places you can order things over the phone.....

Now, it's weekly visits to a friendly sadist (physiotherapist) to make sure I'm continuing my limited exersizes.
These are simply to keep the muscles in my legs from wasting away and involve bending & stretching my leg.
At last, I'm able to start getting about. So far, I've only been out to visit the hospital, to see Lynda & Lee's new baby, Tasha and to visit the pub.
Of course, it took Team.Lard's "Beer Monster", Mark Byrne to do it during his weekend visit to London but he did it!
My first visit to Pakenham Arms saw much amusement from the local crowd - with a similar story in the Hole in the Wall (Waterloo)a few days later.