You are here: Home > About Me > My Stories > Picture Room

The Picture Room was based on the 5th floor of Electra House on the Embankment in London.

This was the headquarters building for Post Office International Telegraphs Officotherwise known as, at various times, TGMO, IT, ET14...

It has a long history, even being hit by a V1 'doodlebug' during World War II.

In addition, it had its own artesian well, had three restaurants and two bars. It was possible to get a three-course meal at 1 O'clock in the morning. Believe me. I have!

I was sent there as an T2A (Technician 2-A) after having finished my apprenticeship around 1976. It was shift work and my T.O. (Technical Officer) was an ex-Cable & Wireless man called Alfred 'Ken' Kennison. He taught me a lot and had very strict ideas of dress code. Despite that, it was the best job I have ever, ever had. 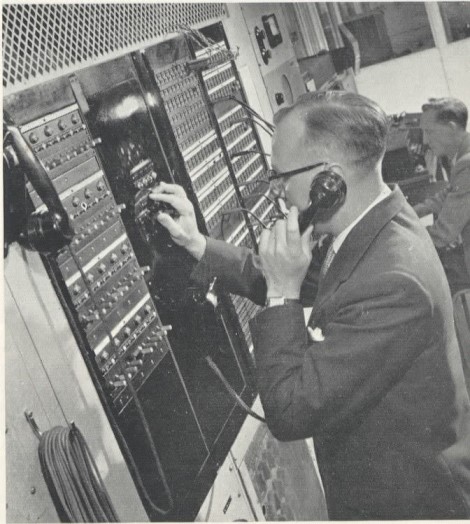 Above is my Technical Officer, 'Ken' Kennison operating the patch panel that connected the picture room to various Fleet Street newspaper offices.

In the background in Nichols, one of the other TO's on Shift work.

Below is a picture of the same two men but this time in front of the transmitters and receivers. We had 4 transmitters and 4 receivers althought No 4 was a smaller size drum than the other three. I believe it is now in the London Science Museum although maybe not always on display. Makes me feel a bit old when I can honestly say I have worked on a piece of machinery that is on display there!

A source of information about Electra House can be found at the following links (& I thank them for the pictures that originally came from Les Parnell who was the TO(A) when I first went to work in the picture room. He was subsequently replaced by George Wickings (Wikins?). Now that's another story!